They call themselves “The Joy Team,” but when you see the Rogers girls at a dog show venue, you know it’s all about commitment, competition, and character.

And that’s exactly what the audience will get with Sophia, 19; Emma and Faith, 13; and Julia, 9, at The National Dog Show presented by Purina on Nov. 18-19 in the Greater Philadelphia Expo Center. The showcase event is also a Thanksgiving Day TV staple, airing at noon on NBC following the Macy’s Parade.

The quartet is part of a nine-child household, along with mom, Kim, and dad, Robert, meaning there is seldom a quiet moment in the brick Federal-style Mansfield, N.J., farmhouse built around 1790.

Their 10-acre site is also home to a few other occupants: cows, named Betsy Trottwood and Constance Contraire; a cantankerous donkey, named Noel; a bunch of goats; a couple of barn cats, named Florence and Cuddles; some chickens; and three adopted horses, Maggie, Handsome Harry, and Beauty. There are also six resident dogs: one Great Dane (Joy), two American Foxhounds (Bobby and Glory Be), two Pointers (Grace and Max), and a Labrador Retriever mix (Midnight). 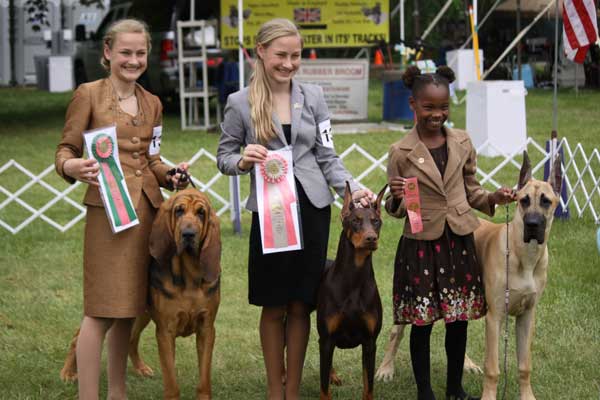 Rogers sisters gather after a big day in junior showmanship in a Delaware show. From left, Emma and Hendrix won Best Junior, Faith and Nadine won Reserve Best Junior and Julia and Captain took first place in their class.

Sophia won the coveted Westminster Kennel Club Junior Showmanship Award in 2016 with Bobby, prompting the girls to name him Westminster Bobby. “He is ready for any adventure the girls want to do, from snuggling on their beds, going with the family to soccer games, following the girls when they ride horses, and saving the world from evil barn cats,” Kim Rogers smiles. And he’s front and center whenever Philly Pretzels and pizza crust are on someone’s plate.

At the National, you’ll need a catalog to keep up with the Rogers girls and what dogs they are showing. In most cases, the dog is co-owned by another party. Altogether, the four, plus granddaughter Emily, 5, will handle 10 dogs.

The odyssey from soccer to dog show, while filled with challenges, has resulted in a wide network of richly nourishing foundations and friendships for everyone.

“One of the most beautiful aspects of our soccer family turned dog-show family is that it has been a successful journey because of the investment of responsible and caring dog people,” says Kim Rogers. “My daughters can’t imagine not being involved with the world of dogs.

“When we decided to add a new puppy to our family, we never imagined what an amazing journey this newest member would lead us on. Nor did we realize what doors would be opened for our children and new paths our family would travel together.” 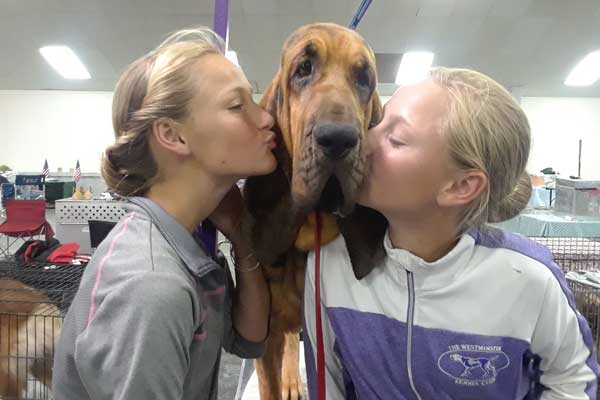 After finishing grooming Hendrix, a Bloodhound, Emma Rogers, left, and Faith get in some special smooching time at the Blue Crab Cluster shows in Richmond, Va., last July.

It began seven years ago, when 12-year-old Sophia wanted to show the family’s new Great Dane puppy, Joy. A nearby kennel, where the handling class was conducted, also hosted a canine 4-H club, sponsored by the Burlington County Kennel Club. So all the pieces fit together nicely.

The Rogers became members of the canine 4-H club and the kennel club, and Sophia began junior showmanship and rally. It wasn’t long before she discovered the new title of grand championship, then owner-handler competitions.

This sparked interest from her twin sisters, Emma and Faith. “We told the children that it would take the combined cooperation and effort on everyone’s part to make this work,” explains Kim Rogers. “They would all be critical parts of the team. The Joy Team was named after the dog, but also to remind everyone to have fun.”

The twins were like sponges, Kim Rogers adds, watching and eager to begin to show, too. “There were endless dog shows at our home with plastic toy dogs, stuffed dogs, and borrowed real dogs. We realized this was more than a passing phase. We saw the rewards of teamwork, responsibility, good sportsmanship, perseverance, determination, hard work, and acts of unselfishness. The girls were flourishing with this new passion.

“What we didn’t expect was, from the very beginning, an outpouring of kindness, support, and encouragement from the dog show community. We found an extended family for which we are extremely grateful.” 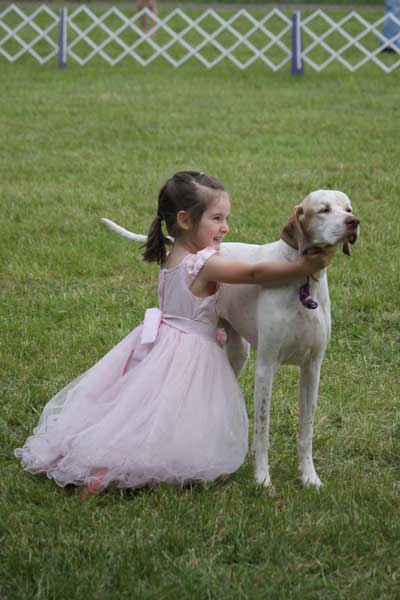 The Rogers’ granddaughter, Emily Karatka, 5, shows off Gracie, a Pointer, in Pee Wees at the Burlington County Kennel Club show in New Jersey.
Emma captures her early love affair with dogs beautifully: “There was once a little girl who got to play with the most beautiful dogs in the land. Some were enormous friendly giants and some were tiny cuddly balls of fur. But all had hearts of gold and showed the little girl the secrets of goodness, faithfulness, and unconditional love. Each one left its paw print upon her heart. That little girl’s story is my own.”

While transitioning from soccer to dog show handling. Emma and Faith learned it was difficult to juggle their schedules and be competitive in both.

“We have tried to teach the girls to honor their commitments,” Kim Rogers adds. “If you are on a team, your team commitments come first. Your teammates are depending on you. Life is full of hard choices. Emma and Faith chose to stop travel soccer in order to show more. This year they are playing on a high school team. Sophia put soccer first and dabbled in juniors, but as her knee became more painful she stopped travel soccer and just played on her high school team.”

Sophia attends Rowan College at Burlington County (Pemberton, N.J.) on a soccer scholarship, and she has reduced her dog show schedule. Julia is playing travel soccer and will participate in juniors, working around her soccer team’s schedule.

Scheduling for the four is a juggling act, with mom and Sophia serving as dual choreographers. Sophia keeps track of the show calendar, suggests those to enter, and lets mom know the closing entry dates. Some entries wait until the final day. 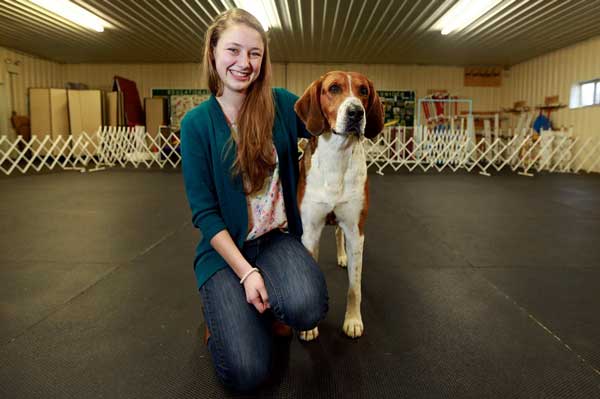 Sophia Rogers, 18, with Bobby, an American Foxhound, takes a break from training at Allen’s Kennel, where the girls take classes. The facility is a 20-minute drive from the family’s Mansfield, N.J., home. Photo by David Swanson/ Philadelphia Inquirer.

To minimize expenses from hotel stays and extra meals, the bulk of Team Joy’s shows are within a three-hour radius of home. Target events in addition to The National Dog Show are the AKC National Championships in Orlando in December, and the Westminster Kennel Club Dog Show in New York City in February, as well as breed nationals, depending on where they are held.

Seldom does the family find time to push the pause button. Training also must be factored in to a virtually non-stop schedule. Each Thursday night, the girls travel to Allen’s Kennel for two-hour sessions. And almost every weekend, you’ll find the girls competing at a Northeast show. “The twins would be happy to show every weekend,” laughs Kim Rogers, “but I try to maintain a balance in everyone’s schedules, needs, and desires, with the realization that there is only so much time and money.”

Add to that the doggy sleepovers, where the co-owned dogs will come to the Rogers farm, enabling the girls to establish a working relationship in a relaxed environment and providing Sophia, who recently received her juniors judging license, a chance to provide her sisters with handling tips.

All of their interactions aren’t limited to their home turf. You might find them at Norwegian Buhundbreeder Elsa Turner’s home working with young puppies or at Rhodesian Ridgeback breeder Jeff Lentsch’s residence for mentoring and encouragement. Turner and Lentsch co-own dogs the girls show in junior and breed competition.

They also spend time with countless others in the extended Team Joy family, from Pat Foley, their trainer at Allen’s Kennel, to all of those who share their dogs with the girls on the show weekends. 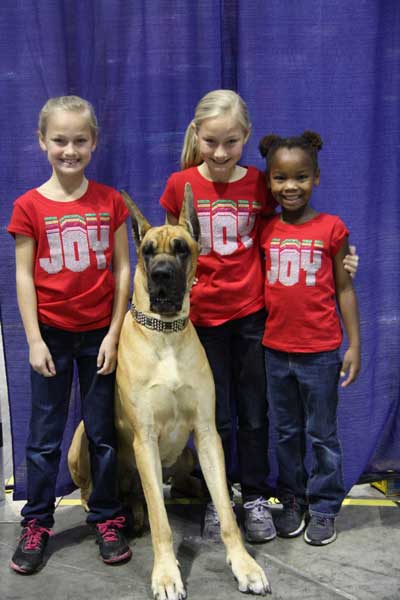 Team Joy, from left, Emma, Faith and Julia gather with Joy at the AKC National Championships in Orlando, Fla., in 2013. Emma and Faith were 9 and Julia was 5.

Robert Rogers attends the AKC National Championship each year in Orlando, but is usually the overseer of the couple’s four boys when the girls and mom are at a show. “I support all of our children’s dreams, goals, and interests,” he explains, “but I don’t enjoy dog shows. However, I see the good things that participating in this sport have brought to my daughters, and I am grateful.

“When I saw my previously shy little Emma in the arena at Eukanuba in 2014 under the lights step out so confidently to take on what she wanted, how could I not see what a big impact this sport was having in their lives?”

“My dad supports us 100 percent,” emphasizes Sophia. “None of this would be possible without him. He is a hero to all of us. We couldn’t do this without the help of our brothers, too. It truly is a family team.”

The dog show world, the girls agree, is more than flash and flair. It also involves growth and grit. Life’s lessons, family bonding, and cultivating new friendships will shape their characters and cement their foundations for decades.