Chicago Cubs fans waited for more than 100 years to celebrate bringing a title back to Wrigley Field and they wasted no time securing a spot to watch the parade.

Don’t get mad Blackhawks fans, but this was the biggest parade that the city of Chicago has seen since Ferris Bueller’s Day Off.

And it lived up to expectations.

Chicago's waited 108 years for this, and it shows. (via @nbcchicago) pic.twitter.com/6xCzUXKEmI

My managers at work today: "Well, WE'RE going to the parade, you guys are welcome to come with us. " 😂😆#cubsparade

Even Grant Park, where the Cubs will be ending their parade, was packed before the parade started. 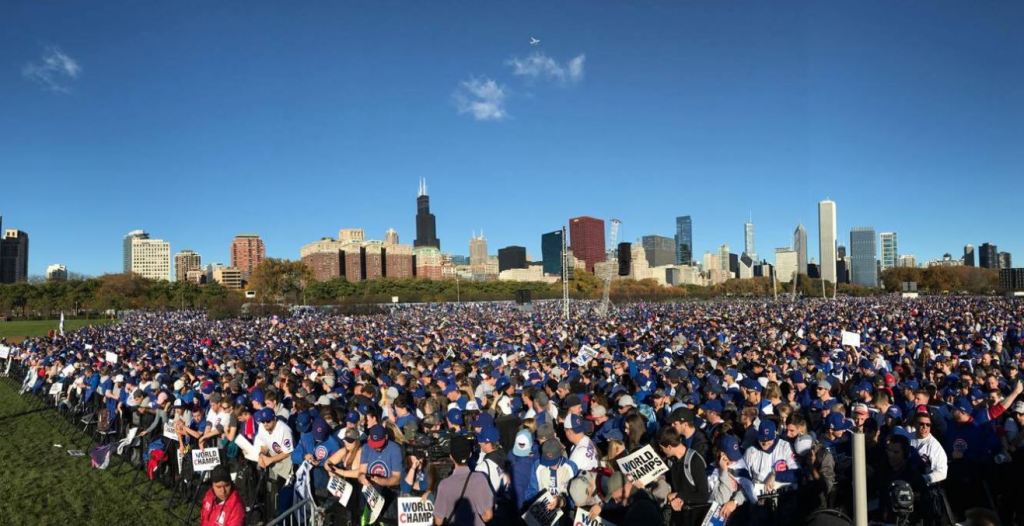 Other Cubs fans took to the great outdoors to conduct their parade.

So this is what the Chicago River looks like when it's blue… #cubsparade pic.twitter.com/W7lhDJND3S

In an incredible twist of irony, Chicago Public schools were scheduled to be closed on Nov. 4th anyway for a school improvement day, but some schools in the Chicagoland area were still given the opportunity to participate in the festivities thanks to a really cool principal.

when your parents won't let you go to the cubs parade but your desperate af 😒😞 #cubsparade @prowl5 pic.twitter.com/EuAbBULI6m

There are snow days… and then there are Cubs days. #NoSchoolFriday pic.twitter.com/jnBOaLFiha

On the buses, Anthony Rizzo was amped, while team grandpa David Ross discovered how to take a pretty well done selfie.

Travis Wood just got a little too excited.

Veteran pitcher Jon Lester has been through enough World Series parades to know that when they tell you to sit, there’s probably a good reason.

They keep yelling at us to sit down! Rossy almost got decapitated!

Hey Chicago, what do you say? pic.twitter.com/07WSgXBX3s

Walter Payton’s son, Jarrett, found a warm (and rather spacious) spot to watch the parade.

We are ready for the #Cubsparade. Thank you #Cubs for helping create this moment. 🙏 @paytonson #LetsGo pic.twitter.com/bszpfk8RM0

I can't do anything but smile 🙂 #cubsparade

The intro of the day goes to play-by-play man Pat Hughes, who summed up exactly what all Cubs fans are thinking.

Theo Epstein reflected on the Cubs’ season and what this World Series meant to the team in an emotional speech at Grant Park. He mentioned that the rain delay during Game 7 was a big deal for the squad, and after introducing Joe Maddon, he relayed that he’s going to continue on his bender.

The Cubs manager also wore a “We Did Not Suck” shirt.

Miguel Montero and Jon Lester kept it short and sweet. Montero just said, “We Are Good!” and Lester called for more cheers for David Ross.

#wearegood!!! Haha I hear you Miggy

MVP Ben Zobrist spoke a bit longer, giving credit to Anthony Rizzo for playing Rocky movies all week long and David Ross for inspiring the team when the Cubs were down 3-1.

"We're in a city of MVPs". @benzobrist18 is giving the best speech of the day. Love this! #cubsparade #WorldSeriesMVP

.@benzobrist18 is like 30 seconds away from breaking up the MVP trophy and throwing the pieces in the crowd a la Mean Girls #cubsparade

Anthony Rizzo gave credit to nearly every person associated with the Cubs, even giving the final out to owner Tom Ricketts. The most touching moment of the speeches was when the first baseman got emotional when introducing catcher David Ross.

ANTHONY'S CRYING. NO. OH NO. #cubsparade

Grandpa Ross revved up the crowd with a major CHICAGO, thanked his family, and then did the most millennial thing of all time.

He took a selfie with the crowd.

We made it through nearly the entire parade before we found the Cubs’ J.R. Smith: Travis Wood, who lost his shirt as Brett Eldredge closed out the event with a rousing rendition of “Go Cubs Go”.

For a celebration 108 years in the making, a turnout of 5 million people is tremendous.