Over the last two weeks, the NBC Sports newsroom has watched a lot of Olympic events.

From archery to handball to synchronized swimming, we’ve seen it all, including some of the most viral moments that sports has seen this summer.

We laughed, we cried and we uttered the word ‘WOW’ more times than any of us can count. Here is the newsroom’s favorite viral Olympic moments: 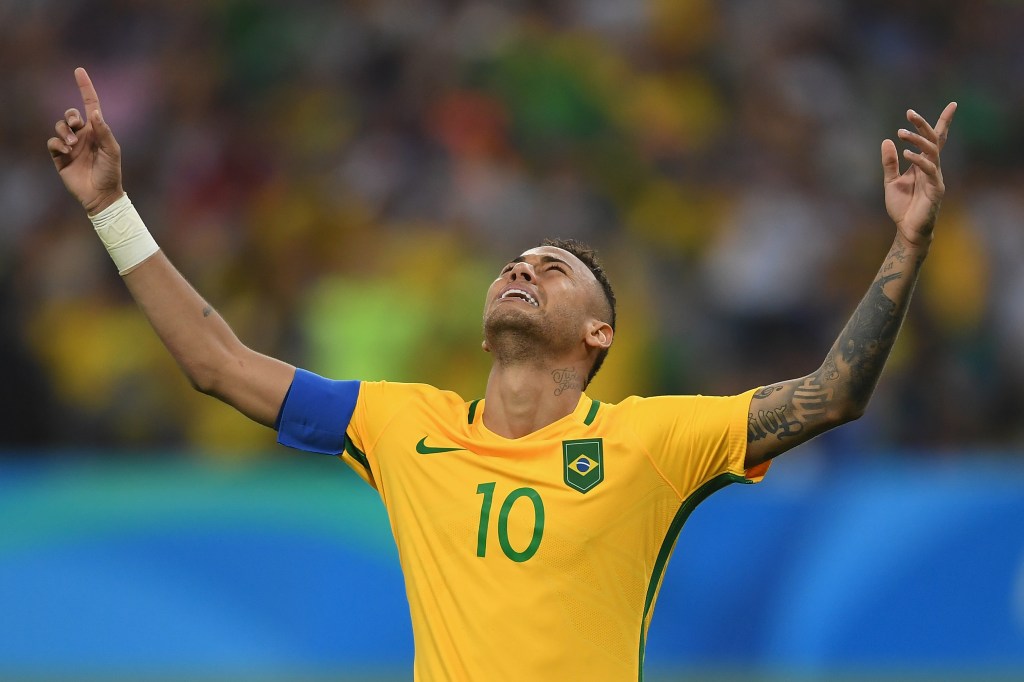 Brazil’s two years of worldwide soccer struggles began with Neymar’s fractured spine on home soil, causing the captain to miss Brazil’s humiliating 7-1 World Cup ouster at the hands of Germany in 2014. That that loss at the Estadio Castelao came at the hands of Germany makes the 24-year-old’s performance in this year’s Olympic final even sweeter. Neymar was a man possessed in Rio, especially in the gold medal match; He opened his team’s scoring by kissing a free kick off the crossbar and beyond German goalkeeper Timo Horn. The goal was viral enough, but not as much as the images following Neymar’s winning penalty kick in front of his home fans at the Maracana. The devout weeping superstar dropped to his knees, looking skyward with his arms stretching toward either sideline stand full of jubilant Brazilians: Two years behind schedule, the country’s biggest star delivered a golden prize on home soil.

The photo of Usain Bolt leading the pack in his 100m semifinal captures the essence of his 2016 Olympic Games perfectly. A bunch of talented athletes trained for years to compete in the Olympics and are huffing and puffing behind Bolt, who flashes a smile at Getty photographer Cameron Spencer as if he’s taking a jog in the park. Bolt delighted viewers internationally because he made each race look so effortless. Cameron captured one of the best images of the Rio Games, one of an athlete that this generation will reminisce about for decades to come. 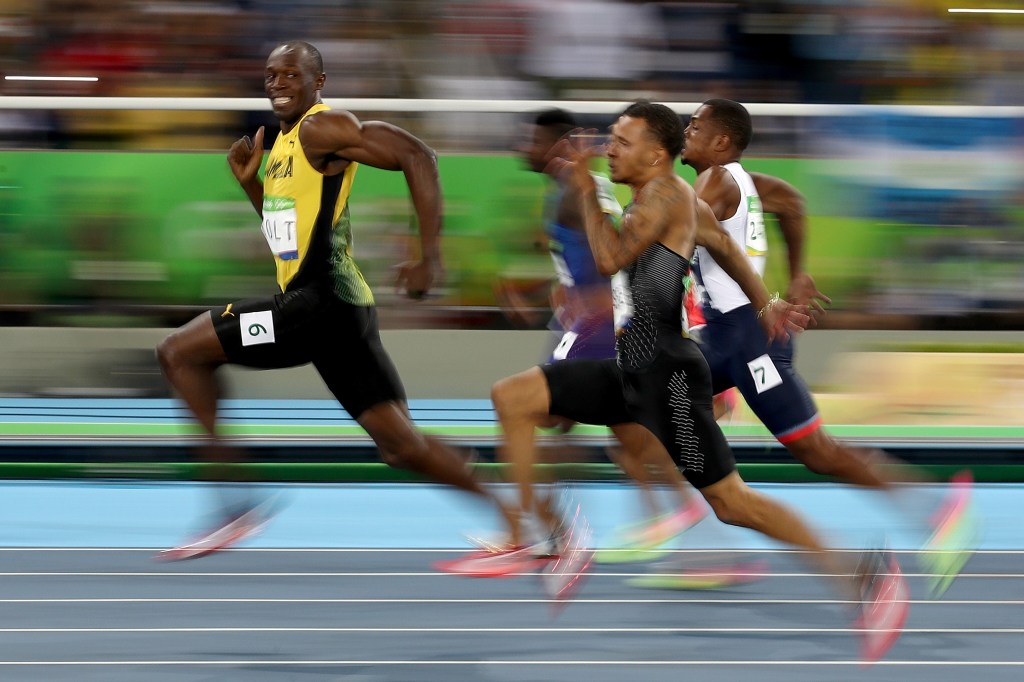 Runners come together for Olympic moment in women’s 5000m

There are some moments over history that become indelibile to the Olympic Games. For the 2016 Olympic Games, it was the moment USA runner Abbey D’agostino and New Zealand’s Nikki Hamblin collided during the women’s 5,000m and the subsequent actions.

Instead of scrambling to return to the pack, D’Agostino went to Hamblin to help her up and urge the New Zealand native to finish the race. After finishing, doctors would discover D’Aogstino had a torn ACL, strained MCL, and torn meniscus. 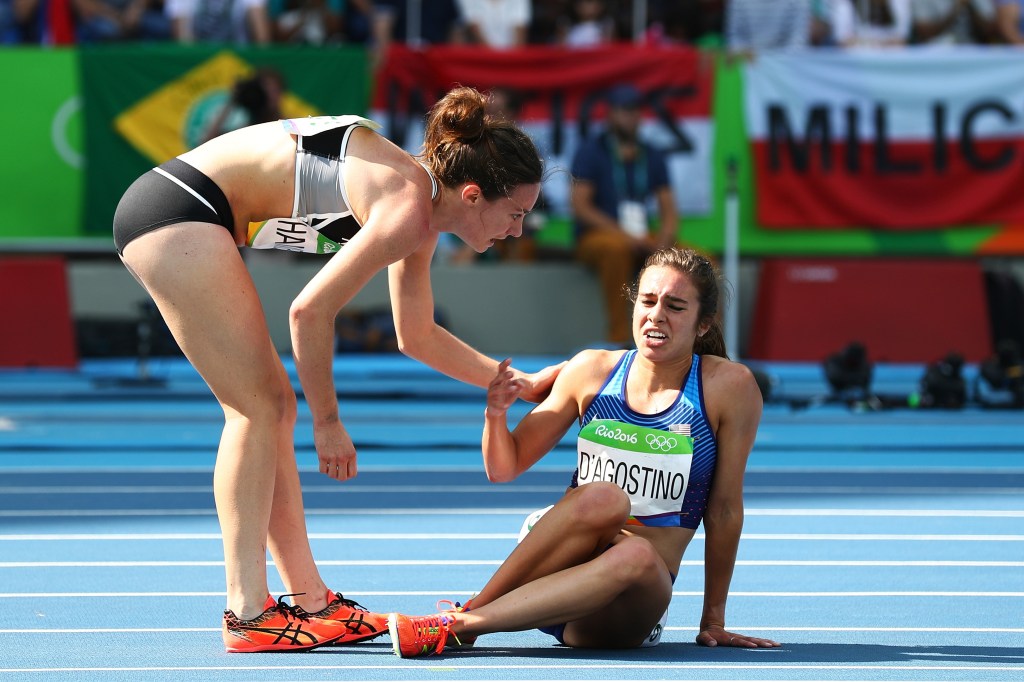 The two 5,000-meter runners, whose act of friendship captured the Olympic spirit, were each awarded with the Pierre de Coubertin medal in Rio for their display of extreme sportsmanship and personifying the Olympics.

For another brief yet indelible moment in history, the Olympics weren’t about winning, but rather the spirit of competition and desire to help your fellow man, and a moment to be celebrated from the 2016 Rio Olympics.

On an absolutely loaded weekend of professional wrestling, somehow the Mongolian wrestling coaches found a way to steal the show.

In the bronze medal match of the 65kg weight class, Mandakhnaran Ganzorig was deducted a point for avoiding Uzbekistan’s Ikhtiyor Navruzov in the final seconds. Due to the penalty, the match ended in a tie, so Navruzov was awarded the bronze medal because he had scored the final point.

This did not sit well with the Mongolian coaches. They initially challenged the call by throwing a toy version of the Rio mascot (yes a stuffed version of the mascot is the equivalent of the NFL’s red flag). When the judges stood by their decision, the coaches’ music hit and the crowd lost their collective mind:

Never was this more evident than during the 800m free in which Ledecky destroyed the field by so much that, upon finishing the race, the next-closest swimmer WASN’T EVEN IN THE FRAME.

.@katieledecky finishes the 800m Freestyle in World Record time…and no other swimmer is even in the frame. 😮 pic.twitter.com/DqCEwpeXll

Seriously. Look at that. It’s like if I tried to run a 5K against a six-month-old.

All this needs is this GIF.

For the athletes the Olympics are the culmination of years of hard work, well beyond the four years in between Games. And that’s why I’ll always remember Colombian weightlifter Oscar Figueroa’s reaction after he took gold in the 62 kg weight class.

Already assured of a gold medal Figueroa missed his final attempt, and his reaction was everything. He celebrated, he gave thanks, he cried, and he removed his shoes and placed them on the mat to symbolize his immediate retirement from the sport. A move I first saw done by American Greco-Roman wrestler Rulon Gardner and imitated by others, retiring in the immediate aftermath of a competition is something you don’t always see. Especially in this era of lengthy farewell tours and the like.

For that reason, Oscar Figueroa’s moment will be something from these Olympics that I won’t forget anytime soon.

While there were plenty of memorable moments in the Olympics, the one that easily stands out is PhelpsFace. Michael Phelps’ intense staredown of Chad le Clos, the swimmer who beat him in the 2012 games in London, was the first true sign that the Maryland native was locked into the Rio Games. He wanted to dominate and getting back at Le Clos was on his list. And the Sith Lord memes and four-day hashtags that ensued were extra special bonuses as the reward.

Why exactly do Michael Phelps and Chad le Clos hate each other? https://t.co/0KrDPyGWkV pic.twitter.com/0VITqYwKsk

It’s good to be Simone Biles. The world’s top gymnast led the Final Five to team gold and earned four additional medals of her own, but that isn’t the only reason why she’s making girls around the world jealous. Just days after the internet went crazy for her awe-inspiring routines she set the internet ablaze again for her reaction to being surprised by the one and only Zac Efron.

Biles was never shy about her love for the actor and as a result the Final Five was treated to a surprise visit by the star in Rio. While surprise visits from famous people are enough to go viral, the best part of the whole thing was perhaps Biles’ reaction itself. It was pure elation and embarrassment after realizing he must know about her life-size cutout of him in her room, he was of course unfazed. The funniest moment is the anger Biles felt when she realized teammate, Laurie Hernandez, got to hug him first. It’s easily one of the top light-hearted side stories of the Games, if not for Efron himself, but to prove that Biles, while a 19-year-old phenom, is just like the rest of us.

I’m ready to officiate the wedding. Is next Thursday good for you? https://t.co/CmD9Xf97Ri

The SNL comedian was charming us all via Twitter with her sensational (and sometimes NSFW) commentary from her couch, when NBC invited her to come to Rio. She saw Simone Biles and Aly Raisman win medals in the women’s all-around, met Shawn White and even watched Kerri Walsh Jennings and April Ross compete in beach volleyball. Plus the U.S. women’s water polo team even gave her one of their robes.

BEEN IN MY ROBE ALL DAY KNOW IM NOT SUPPOSE TO EAT NACHOS WITH THIS ON BUT YOU MUST KNOW THAT NACHOS ARE OLYMPIC! pic.twitter.com/zu1AMpPwFx

The point is that Jones lived every Olympic fanatic’s dream: Being able to see the events in person and experience what the Olympics are all about. Slay all day, Leslie.

Simone Manuel might have been the lesser-known Simone of the Rio Olympics, but her story is just as inspiring and her 2016 medal count just about as high. After winning gold in the 100m freestyle, she was arguably the most amazed out of anyone (see below) and that kind of reaction is just what the Olympic spirit is all about. She had one of the best facial reactions to her win, but followed that up with one of the best quotes of 2016, declaring “This medal isn’t just for me.” 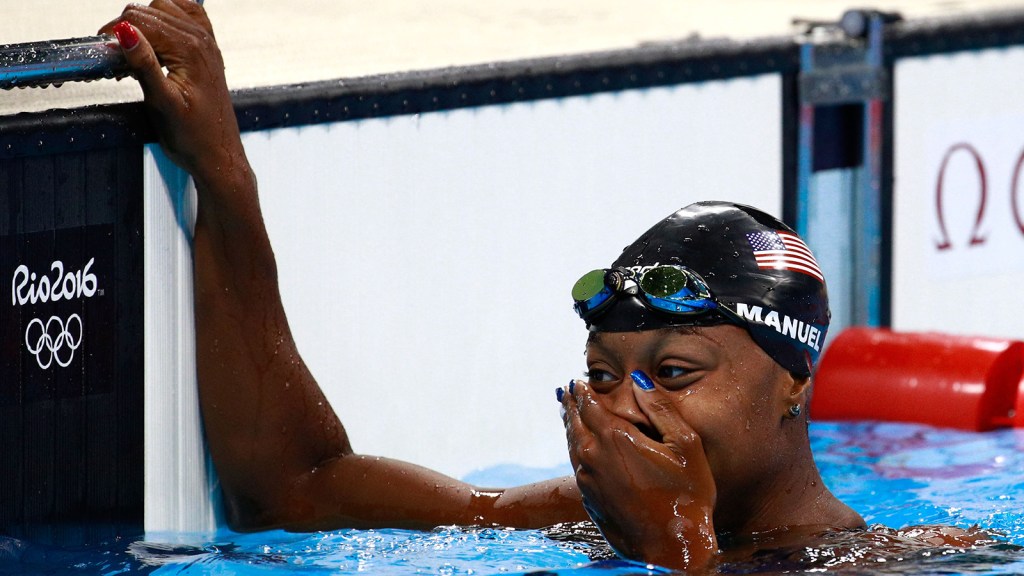 Simone dedicated her gold to everyone who ‘think they can’t do it’ which is just all of us at one point or another. So, major props to Simone for being the beast to show us all that, in the most non-cliché way possible: yes, you can. Also shoutout to all the future that will be named after Simone in about nine months. You’ll be named after a legend.