Kelly Hayes, a spotter on NBC’s Sunday Night Football, is attempting to to complete “The Running Decathlon” which consists of the ten most widely-run track events. His goal is to run each race “half as fast,” or in twice the time, of the current world record in each event. And he will attempt to run these races in the footsteps of those who set the records on the very tracks, and in the very stadiums where the records were set.

His “quest” serves as a platform to raise funds to purchase a $90,000 exoskeleton Bionic Suit, which allows those with critical spinal injuries to rise from their wheelchairs and actually take assisted walks. Think Tony Stark from Ironman. He is relying on donations to the Bridging Bionics Foundation to make this a reality.

Follow Kelly on his journey, which begins in Rome on July 7, 2016, here, on Facebook, Twitter and at race2walk2016.com where you can make a 100 percent tax-deductible contribution towards the purchase of an exoskeleton Bionic Suit for the Bridging Bionics Foundation. One hundred percent of your donations will go towards the purchase of these suits.

Please turn Kelly’s steps into dollars. And we will turn dollars into steps for those who want to walk again.

If you ever saw Hicham El Guerrouj run, then you perhaps saw the greatest runner to ever put on a pair of spikes.

Well, El Guerrouj, to this day, holds the world records for the 1500m and the mile. And they were both set in the last century.

Today, for the second time this month, I took to the track at the Stadio Olimpico in Rome with the goal of running those two events in twice the time, or half as fast, as those records. And with thumping pride I report that, for the second time in a week, I crushed it. Today’s 1500m saw me finish with a time of 6:24.34, or better than :27 faster than I needed to beat the doubled time of 6:52.0 I had set as my goal.

Now this time is nothing special for a real life runner. But for a 60-year-old runner (El Guerrouj was 24 when he set the 1500m record) who outweighs El Guerrouj by 60 pounds, it ain’t bad.

But more importantly, it achieved the goal I set when I originally conceived this whimsical, selfish fantasy of attempting to run in the footsteps of the fastest men who ever ran on a rubber track.

And most importantly, it has led many to come to the race2walk2016.com website, learn about the Bionic Exoskeleton suits we are raising money to purchase, and make a donation. You can do the same.

My pacer, or “Rabbit” as I like to call him, Mattia Barbaro (yes, like the 2006 Kentucky Derby Winner) was aware of the record that had been set in this stadium, but did not know who El Guerrouj was. Of course, he was just 2 years old when the Moroccan accomplished the feat. I told him he needed to check out the YouTube video of the race and then I remembered that when El Guerrouj set the record, YouTube was still seven years shy of its invention.

The race, if you want to call it that, and I do, was similar to the mile run last week. A beautiful empty stadium that seats 65,000, with a translucent overhang that shelters the azure (that’s Italian for blue) seats, has not a single banner, sign or light board that advertises anything. There was a purity to both the visual and aural elements that made running a joy. There was the sound of my breathing resonating off the seats as I ran, but other than that it was pretty silent.

For the uninitiated, the 1500m, or Metric Mile, is the race that is officially contested in the Olympic Games. It is 100m, or 109 yards, or about the length of a football field and one end zone, shorter than an actual mile. You may think that would make the race easier, but I really don’t think so. For one thing, you start the race on the opposite side of the track from where you finish. And that means your first lap is the short one if that makes any sense. I had a difficult time pacing as a result. Which is why I was glad I had my “Rabbit,” or as they call the pacer in Italy, my “Fox.”

But I had watched the aforementioned YouTube video, as sketchy as it is, of El Guerrouj setting his record and it was inspiring. Not just for the speed, but for the precision and economy of motion he puts on display. It is like watching a great thoroughbred run a horse race. There is just rhythm to the motion. Each stride is the exact length, each arm pistons in time, and every fiber of his being moves in a forward motion.

Now obviously, I duplicate none of that. But in my mind, as I ran around the far turn before turning for home, I was running the way you are supposed to run. Oh, I’m sure the attached video will dispute my self-image and reveal how I flailed down the stretch. But again, it matters not. I set the rules for The Running Decathlon. It’s my game. And right now, I’m up 2-0. Eight races to go.

It’s on to Hengelo in the Netherlands and the 5000m. 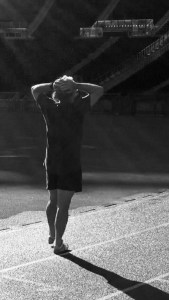