I’m not quite sure how much style I actually have, but I know I love the style of the NBA. From Kevin Durant’s bow ties and thick-framed glasses to Russell Westbrook’s risk taking, the players take their personal looks seriously.

Hello, not every professional league gets their own Twitter style hashtag (#NBAStyle) so they must be doing something right.

Last year’s draft class made some bold choices with many of the draftees opting for suits with a blue, black or red color palette. We even had some unique plaid pants thanks to Rondae Hollis-Jefferson. 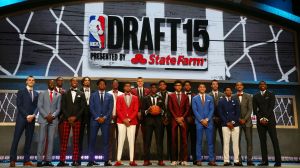 That means this year’s class has a lot to live up to in terms of style points and from the looks of it the top prospects are off to a good, yet slightly more subdued start.

Lets take a look at the styles from this year’s NBA Draft and determine who stood out and who’s style needs a bit of work.

Ben Simmons, the No. 1 overall pick, chose a classic black, three piece suit with a gold tie, which we can assume is a nod to LSU, and a white pocket square. I’m sure Simmons will stand out for not standing out. The look isn’t over the top, but we all know who he is so there’s no need to go crazy to be remembered.

Going in the opposite direction of Simmons’ understated look is No. 2 overall Brandon Ingram.

Look at that jacket! The bold pattern is on point and I like that he chose to stay with the dark gray and black. He still stands out amongst the other solid suits and his decision to skip a tie or bow tie is a nice touch.

Denzel Valentine also opted to go with a patterned jacket. It’s not as flashy as Ingram’s, but the look is put together nonetheless.

Valentine’s suit may not be flashy, but his socks are brilliant.

So we have the classic look and we have the patterned look. All we were missing was the colored suits and purple appears to be a favorite of the night.

Dejounte Murray, a former guard for the Washington Huskies, gets major props for wearing a royal purple suit jacket made of velvet on draft night. However, you have to wonder how long he’ll keep the look put together. All those bright lights? All that pressure and stress? It’s going to get hot in there real quick, but I commend any draft prospect willing to sweat it out in that particular fabric on one of the biggest nights of his life.

I also love a good bow tie and his brings the look all together.

I was fully willing to pack it in and call Murray’s look my favorite of the night. That is, until I saw a picture of Skal Lab! His suit jacket makes me think Easter’s come early, especially with the light purple checkered shirt underneath and I don’t say that as a bad thing.

His look is reminiscent of D’Angelo Russell’s bright red suit jacket, red checkered shirt and white pants from last year’s draft and that had to be one of my top choices.

If this isn’t my favorite look, it’s definitely my favorite of the purple options … unless Murray really is wearing all velvet.

While purple appears to be “it” color, red is still holding strong.

UW’s Marquese Chriss slays (can I say slays? Not quite sure if I even have enough style for that) in the red velvet (?) jacket with black silk lapels, what looks like to be a black velvet bow tie and some added bling.

Best of the red-suited options, IMO.

Marquese Chriss: "It turned out better than I thought. I just love it. It couldn't have been better." #DraftStyle pic.twitter.com/8AiFcnTeQs

His suit appears to come from ALBA Legacy, as was Jaylen Brown’s and a number of other of the prospects’.

They look safer than Kelly Oubre Jr.’s from last year, but you never know.

Will anyone be able to top @KELLYOUBREJR's shoes from last year's draft? Doubt it. pic.twitter.com/tCPSkH8V8F

However, Kris Dunn’s Gucci kicks look safest of them all. Can’t hurt yourself in sneakers, right? It lessens the possibility of walking up to the stage and tripping. However, they may blind you.

Caris LeVert who opted for school pride over fashion.

And Buddy Hield was a stand out out in a crisp white jacket and maroon bow tie.

My favorite of the night is hands down Ben Bentil in a custom ALBA Legacy. It’s everything I wanted from the prospects. It’s crazy, it’s fun, it’s subtly unique.

I made a mental note of the patterned pocket square earlier, but with it paired with just the navy blue suit it wasn’t enough to really make an impact. That is, until he unveiled the lining of the jacket and the shirt underneath. It’s a total game changer. Welcome to the NBA style game, Benjamin Bentil.