If you’re a NBA player and Matt Barnes hasn’t agitated you, you’ve probably been living under a rock.

The Grizzlies’ forward is known for getting in people’s faces and not backing down.

And he’s also not afraid to fight people.

Barnes tweeted last night that his lawyer told him he needs to chill on social media or else it’s going to be used against him in court.

I got an interesting phone call 2day from a lawyer.. Basically what I was told is.. If I don't stop "being mean" to a certain person "cont"

Via social media, that this particular "person" was gonna file a restraining order on me🙄 who am I being mean to on social media🤔so confused

It’s unclear who exactly Barnes may be attacking or who is complaining, but he does have a certain ugly history with an ex-Knicks coach. 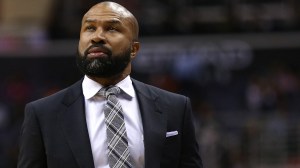